Hi! I am having an issue where the Path Exists activity is not following the loop–if the file doesn’t exist, then it keeps checking for it until it’s found. I watched the process and the folder where the file gets saved. The flowchart and decision just accepts the file exists; however, it wasn’t there. Because of this, the next action, Close Window, throws an error. I have an Assign Activity that makes the Exists variable False. For whatever reason, the Path Exists Activity is changing the value to True, even though the file does not yet exist. Any guidance would be greatly appreciated! Thank you in advance!

Two things to check on.

That’s what happened with me, your random file might be a raw file with same name or

do you have any naming convention , generally these raw files start with $.

Well to avoid it best way to check file is file extension and name.

path.getfilename(“Filepath”).equals(“NameofExpectedFile”).
You can use Wildcards here/

I have a naming convention–AL_CL_20200630_113701.pdf, for example. It includes the state abbreviation, letter type, date, and time that are all captured within variables and passed to the Activities. It definitely looks like a raw file that shows up. That extra information is good to know! Thank you for sharing! It’s maddening that it passes through and then throws the exception in the next action because the file isn’t there. I’ll test that out. Thanks again!

Just one thing to add here.
For folder where you save these files.
Just before path exists, Use a assign.

Files = directory.getFiles(“FolderPath”)
for each file in files

This way, you will see what all files are being generated and you also have anme fo the file that is geenrated as RAW.

Now this silly Path Exists Activity is not finding a file that does exist. I have a variable, FN, that holds the filename. The Assign Activity for variable FN uses a formula to create what is needed–the file path, state abbreviation, letter type, date, and time–down to the second. I just added a Message Box if the flow decision is False to tell me what is in the variable, FN. I verified that it matches the entire file path. What am I missing?

Can you try this with your code.

Here’s how I have it set up, and… now it seems to be working. Hope you can see this! I have my FN variable that contains the file path, name, and type in the Path of the Path Exists Activity. The PathType is set to File. The variable Exists is in the condition of the Flow Decision. 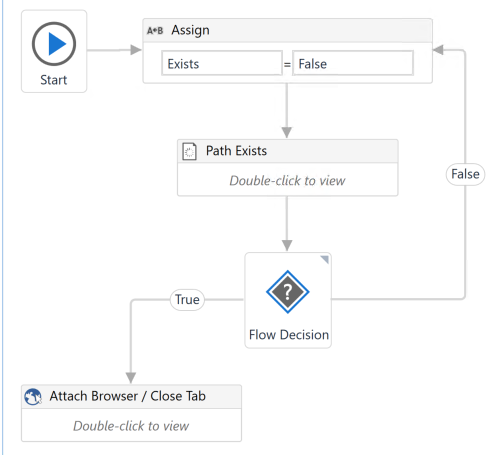 That’s great.
Seems like a ego issue with code, you might have hurt you code a bit

You should look for cause as it might cause issues later on.
Happy Automation

Definitely trying to identify the root cause of this issue because I will have close to 100 processes that depend on the logic of path exists. The reason I’m using Path Exists is to ensure that a file has downloaded before the bot closes the tab/window. I’m hoping this logic makes sense because if the window is closed before the download is complete, not all documents will be downloaded. Thanks for all your help!

This is exactly what i would have used.