Msedge.exe - Bad Image Dialog Box - How to interact with this dialog box in Studio?

We have recently been running into issues when our robots run a specific automation that interacts with Microsoft Edge and Java. The dialog box seems to popup in the middle of the automation and it is “sent to front” over every other application on the screen and often stops the automation’s next steps from occurring correctly. If I login to the remote computer and hit the OK or X buttons, my automations will likely work for a few iterations before it occurs again a day or two later.

I finally was able to catch this popup while it still exists and tried to interact with it on Studio / Recording feature as well as with the “Element Exists” procedure trying to capture the Selector Element of this dialog box so I can code the robot to hit the “OK” button if it encounters it going forward to not hinder the robot’s performance.

However, when using recording or UiExplorer or Element Exists selector indicator - none of them are able to seemingly notice this dialog box or interact with it. Has anyone had an issue with this previously and how do you code around this / interact with these dialog boxes? My IT group seems to think it might be a Powerbroker related dialog box perhaps, but is still investigating it.

The text in the current version of the dialog box is "C:\WINDOWS\SYSTEM32\privman64.dll is either not designed to run on Windows or it contains an error. Try installing the program again using the original installation media or contact your system administrator or the software vendor for support. Error status 0xc0000428. " and the heading of the Dialog box is “msedge.exe - Bad Image”.

I opened Task manager with the dialog box open to see the Properties of the program throwing this dialog box and only Task Manager is showing up as a running application, so that has been unsuccessful and makes sense to why the “UiExplorer” program was not able to sense this dialog box as an interactable item.

Any thoughts on how to interact with this dialog box or has anyone seen this before? I’ve gotten some similar dialog boxes in the past with other .dll items it was having issues with, but would just like to be able to add some sort of “interact with dialog boxes by hitting OK” portion into my code / error handling. 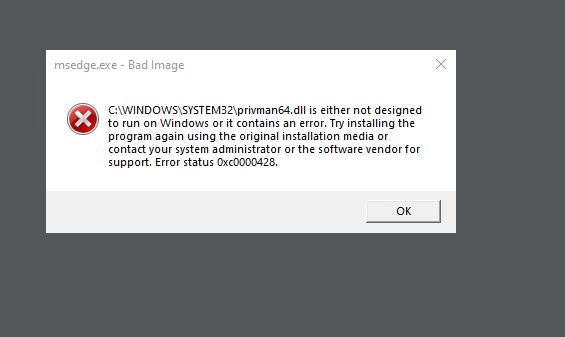 Hi, at first glance I would probably try to use either:

Instead of automating this popup can this error be fixed in the application side?
This error seems to be some configuration issue.

Since I haven’t been able to use the Studio Recorder, Element Exists, or UiExplorer thus far to be able to interact with the dialog box when it existed - I can’t do option 1 or 2 that you mentioned.