I’m using variables to search and open for a specific window on our Agresso ERP webpage but it’s finding the “incorrect” result. How can I force the selector to click on the exact value and not on a value that contains the variable?
(I need it to click in “Personnel” not in “Personnel Information”) 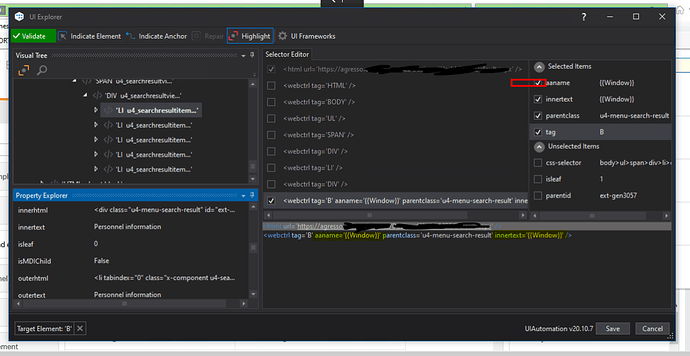 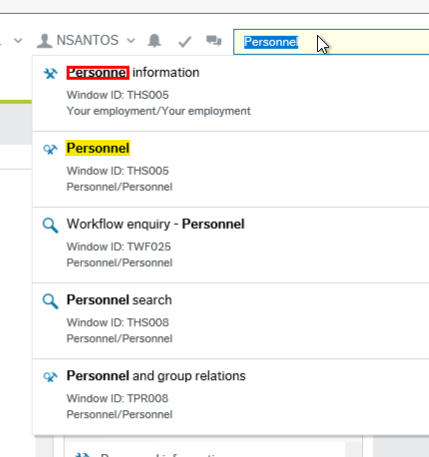 How to use variables in selectors in Studio (dynamic selectors) without string manipulation!
loginerror (Maciej Kuźmicz) December 11, 2020, 2:56pm #2

Could you print the variable to the console, just so we know what exactly is fed into the selector at this point?
Having a screenshot of the original aaname fields would be nice too.

Typically, if you want to click on a specific element, all you have to do is to provide it with a value without any wildcards at any end. So, the variable Window should be a simple Personnel and not, for example *Personnel*

Also, could you maybe try with fuzzy match set to 0?

What’s new? Fuzzy string matching is a technique to search strings which are not a 100% match and match the specific pattern approximately, rather than exactly. Let’s begin Let’s say I want to create a selector which needs to be resilient to user typos or similar user input with a key work I expect to be entered a search field. First, I have opened up a bing.com in my borwser and searched for ‘uipath certification‘ text: [01] When I get a selector for the input field, the ‘title’ attr…

This is because I want to create a “reusable” workflow that reads the name of the Agresso window from the Config.xlsx file on the project, it goes to Agresso, searches for the window and goes to it. So we can use this Workflow for any Process where we need to go somewhere on Agresso to perform actions. In the example of my topic I was testing assigning directly the default values to the variable, I’ve tested with “User Master File” and with “Personnel”, with the first one no issues because it has onlu one result on the search, but with Personnel it clicks on the first search result that is “Personnel Information” and not just “Personnel”.

If I take it without variables I can do it work with this selector:

image1180×589 140 KB
For the moment, I’ve saved a process with the variable selector to reuse it, and, for this specific process, I’ve saved it with the static “Personnel” selector so the issue is “solved” but I wanted to know if there is a way to limit the selector to the EXACT variable match to improve my knowledge and create better automations.
loginerror (Maciej Kuźmicz) December 12, 2020, 11:41am #5

Is innertext property an option? At least in the screenshot it looks a bit more reliable by not containing additional information.

I’m not sure, now I’m having additional issues with this selector

With the selector of the screenshot it was working fine from Studio, but I’ve just published it and launched from my Assistant and it’s not working, it just opens Agresso web page, performs the login but it don’t do anything else on Agresso (it don’t search for the window, open it and read data) it throws an App exception and go to the next transaction

Nevermind I will stop here today, I don’t have more time so I will continue another day

Why could be the reson for a selector works from Studio but not from Assistant?
I can’t understand

I’ve added a 5000ms Delay before and a Click before typing to the actvity and it seems to be working fine since Assistant now.

(1) Please check out that innertext property, it might have the specific text of each field, which would allow you to accurately match the fields

I’ve added a 5000ms Delay before and a Click before typing to the actvity and it seems to be working fine since Assistant now.

A simple Find Element activity instead of a hard coded delay might still work and be a bit more dynamic solution (the selector for that activity can be either the exact same that fails later, or something more general, like a container for the other elements). Its purpose would be to wait until specific element is found, and only then proceed.

Thanks!! I will test it as soon as I will have some minutes for it.

Did got solution for this, facing similar issue