How to pass variables in selectors

My selector is this

If someone can help, please.

Thanks I forgot to put apostrophes in tableRow.

Hi,
<webctrl aaname=’"+day.ToString()+"’ parentid=‘drawerMiniMonthNavigator’ tag=’
I already used ’ “+day.ToString” ’ but it just didn’t work out. I use google calender so i don’t know this fail just appear on gg calender or not.

hi this video help you to understand dynamic selectors

Same, I tried above all methods but still it is going to error.

Hi all, To pass your variables or arguments to selector, DO NOT CLICK the “…” box to open the Selector Editor window. The Selector Editor window does not recognize your variables or arguments. You need to edit the selector directly to the selector field in the property pane (Which is a Expression Editor). Try to Type the the step as follows: " SpaceBar “+” your variable or argument ( the drop down box will appear showing that the program is now recognize your V and A) PS. After you edit sel…

Above code is not working for me,
Note: comm - string type.

But you need to pass through a string variable. Not directly on the selector.

Hi,
I have applied same logic still iam getting error

Hi ,
Iam facing same problem, have you got solution… 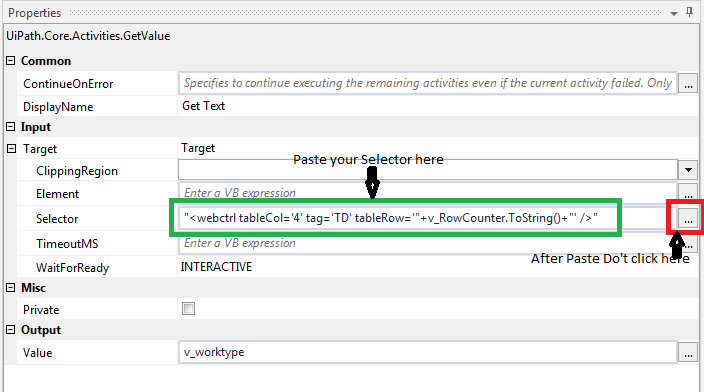 Hi Arivu, can you please explain what the + sign on either side of RowCounter.ToString help to achieve?

RowCounter is an variable for appending to selector dynamically adding into the selector using the + icon to appending the value.

Output will come as

Wow, thanks for the lovely explanation thala!

Not sure if it’s been mentioned, but remember to write directly in the Selector field.
If you first press “…” to open the Expression Editor, then double quotes " will be saved as rubbish like this: & q u o t ;

You can now define your variables for selectors directly in Studio.

A dynamic selector uses a variable or an argument as a property for the attribute of your target tag. This allows the selector to easily identify a target element based on the value of the variable or argument, and not an exact string, which might...

As well as this short tutorial on our Forum:

How to use variables in selectors in Studio (dynamic selectors) without string manipulation! Tutorials

This tutorial will teach you how to easily use variables in your selectors. In other words, we will be making dynamic selectors without the use of the old method of concatenating strings. How cool is that!

For the purpose of this tutorial, I will make 1 click in the Notepad app. Feel free to also reference our documentation here. Let’s begin! 1. First, we will indicate the element we want to click on. In this case, it will be File menu in Notepad: [image] This results in the…

13 Likes
Edit selector using variable
Find variable in SAP DataTable, if found, then click and highlight row with variable
Choose next item in a loop
How to select dynamic content (UI elements)
← previous page
Sign Up Log In