Hello. I am using the filter data table activity, to filter a DataTable extracted from a DataScraping done in a website. The thing is that I need to filter the rows depending on some values. What I found, is that when it comes to putting a condition of an Integer, it won’t do the filtering, whereas if I only put the String conditions, it works.

Is it because the DTScraping activity only gets the Integers as Strings? If so, how can I solve that? I have tried doing an Assign and converting it to integer but nothing worked.

Any help would be really appreciated. Thanks!

@ecarles Check the below link, it might be useful in ur case.

Deleting rows from a sheet after filtering Help

Thanks @MAHESH1 ! Got 2 queries regarding filtering a data table and writing filtered data into new sheet as you mentioned before. Suppose if the filtered data table contains no rows, I don’t want the new sheet to be created then. How do I ensure that the bot moves to the next item and does not stop ? How do I use a “less than ( < )” in a filter ? Say for e.g. in the code - dt1=(From p in dta.Select() where Convert.ToStringf(p.Item(“Column C”)).Equals(“Value”) Select p).ToArray.Copy…

It’s not exactly what I’m looking for, but thanks!

Hi guys, I want to filter a data table based on a value of a column, I wrote: “ColumntName”<“10” but id didn^t work. Any Idea how to deal with Integers in this filter? Thanks in advnace

SELECT with string to integer/decimal PARSE is not working Help

This issue is somewhat covered in some earlier topics, but I still fail to make this work. I have extracted numerical data from web in string format (“123,45”) into a data table. I am using select and parse to filter rows based on the numerical value of the column “c2”, but fail to get it right. tableName.Select(“int16.Parse([c2], NumberStyles.AllowDecimalPoint) <200”).CopyToDataTable() is not working. I have tried different version of using ’ and " in SELECT but w/o success. Can anyone he…

As per the first post you’ve linked, where do I write the following statement?

It’s actually what I need. Do I write in an assign inside a for each row?

@ecarles That statement has to be written outside for each row

alright! Tried it with an assign activity just before the filter data table activity

and it gives the following error 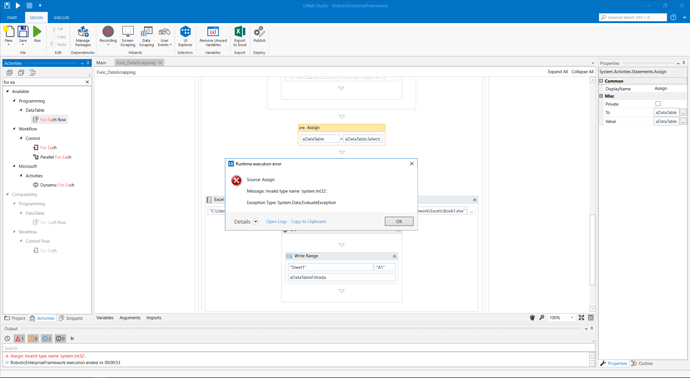 Any idea of what to do? Should I type the filtering condition there too?

Wrote the condition too aDataTable.Select(“Convert([WIID],system.Int32)<200000”).CopyToDataTable

and it gives the same error as before

Tried this, gives me the following error 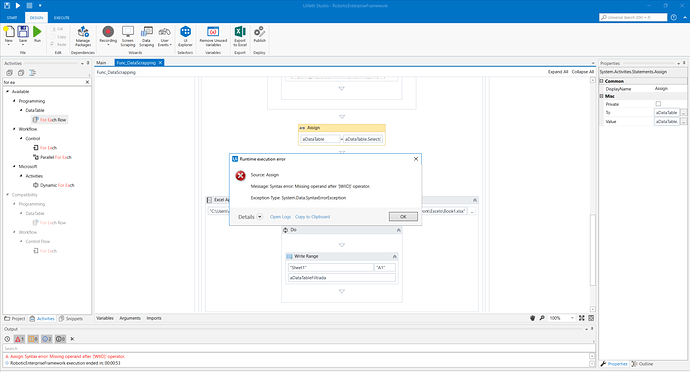 In the Filter Data Table activity, try to use a float value as 200000.0 instead on the integer value (200000) for the filtering value. It’s a known issue and a fix will be released soon.

For the DataTable.Select method, to convert to a different data type you can use something like “Convert(WIID, ‘System.Int32’)”, check this article for more details.

Instead System.Int32 you used system.Int32 that’s y u getting that error (you Used lowercase letter for System instead of UpperCase)

I have tried the float value thing and still nothing happens to my excel.

I know it’s this the issue because if I take the WIID condition then the filtering works properly and pastes it to my Excel file.

Here is a capture of what I’m talking about 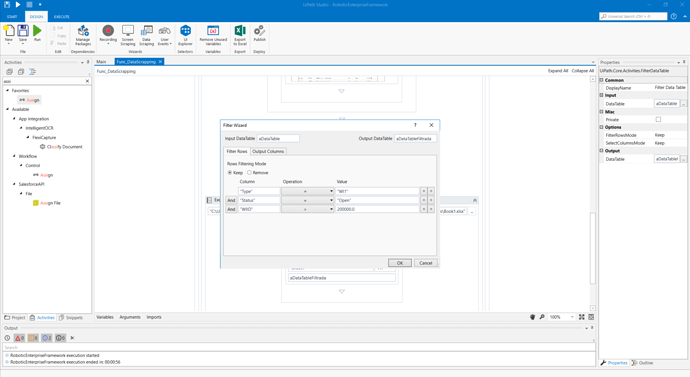 Any idea? Many thanks for your response!

Thanks for your help though

Im not able to attach xaml as im new user.

Hi, I have been studying the same topic lately.

I just tried the following with Convert with ’ -marks around System.Int32 and it worked.

More on this topic at DataColumn.Expression Property (System.Data) | Microsoft Learn (See Convert- examples on this page).

Also “SELECT” does not support CInt() -function, but it supports Convert and some aggregate functions. See DataView RowFilter Syntax [C#] for more information.

This worked!!! Many thanks dude! Forgot to mention that after putting this “condition” Assign, then you don’t have to put it again in the filter data table activity