Hello. I am trying to understand the dynamic selector. I followed the research through to this link.

A dynamic selector uses a variable or an argument as a property for the attribute of your target tag. This allows the selector to easily identify a target element based on the value of the variable or argument, and not an exact string, which might...

I attempted to download the xaml/json file and see if it worked for me which it did not. I am trying to use dyanmic selectors with variables assigned earlier in the project to select the correct box on the screen. The first image is of the downloaded project file in the documentation. The second is of my example. 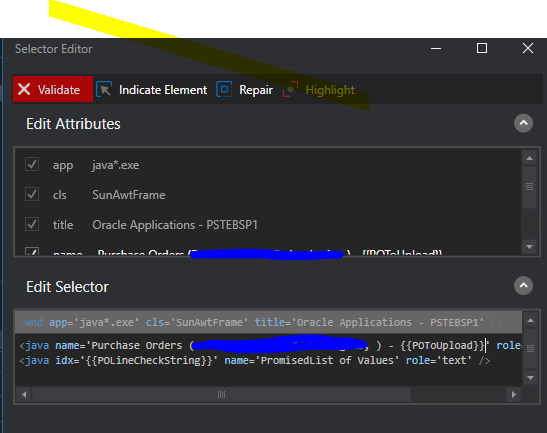 @Thunder
Welcome to the forum

ensure for the stand alone validation

Both were ensured. POToUpload is a String and I tried an Int32 to see if it worked that way.

Can you explain further on the second? How would it be dynamic if it were a default value?
POToUpload is assigned a value earlier in the project (a six digit number). Before I change the selector, they are similar. For example,

POToUpload is assigned 688888 earlier in the project.

Ah! That was the solution! Thank you for that. I assigned a value in the variable before the project started and it validated it. Thank you!

when the bot is running it will take dynamicly during the run the variable value and use it
when you validate in the selector editor / UiExplorer the selector the variable doesn’t have a value. Thats why the default value is needed

I assigned a value in the variable before the project started and it validated it. Thank you!

Perfect, just do your final testing and close the topic with marking the solving post as solution. So others can benefit from this. Thanks