Not Getting expected results in LINQ compare to SQL

Hi,
I am trying to replicate the below SQL query in LINQ but I am not getting the expected results, whereas the record counts conflict, I am trying to get matched records.

SQL Query - record count is 245(with both the condition)

LINQ query record count is 538 with both the conditions, when utilizing both conditions in Join Data Table activity the count comes down to zero.
Both the DT DTBankTrans and Stmnt_NewDT have records

Is this anything to do with the datatype of both the columns? as in raw data(in excel) Amount column cell format is Number and it’s up to two decimals.

P.S - In SQL and in my workflow, record counts of both the DT matched with SQL.

@indrajit.shah
besides on our discussions via messages I would like to adress your question on a independed base.

The case can be interpretated that the data comes from a Database and the data can be fetched from there with a SQL Statement.

The question can also be interpretated as it is to find the corresponding LINQ statement doing the same as the SQL Statement is defining:

On the first look the statement looks fine and should do it. In such a case following analysis can be driven:

as an alternate following can also be cross checked: 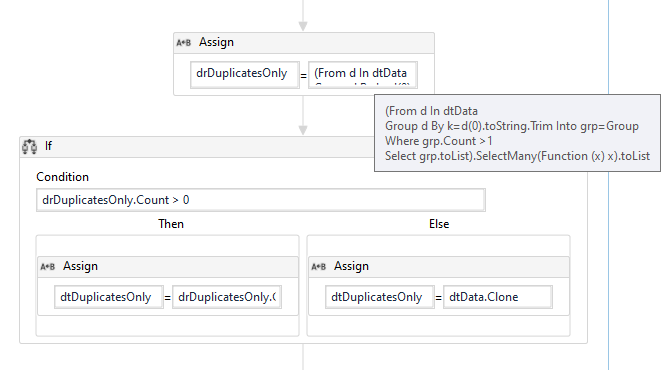 Let us know the results from your further analysis steps. Thanks

Thank you for your reply and guidance.

It’s the is 2nd scenario, My data comes in an excel file only, to check/verify the desired output I tried writing a few SQL queries.

I didn’t get to try the suggestion you shared.

Also when writing the data in excel the format of a few columns changed, I have sent you a personal message with screenshots.