How can I use the Type Into activity to identify the correct element based on the specified automationIDs, not the text included in the element

Goal: I’m trying to build a robot that will update numbers in a table built into a 3rd party application. In other words, I want the robot to go to the October 2022 Column, find the row associated with “Provision for Depreciation” and use the “Type into” activity to populate $100,000(made up number). and then continue the loop I’ve set up to populate all balances.

Problem: The problem that I think I’m running into is that the “Type Into” activity seems to require a visual match in order to locate the cell to populate. This is an issue because all the cells will be “-” or blank since I haven’t updated the cells yet. I thought I’d be able to get around this by updating the various "<ctrl automationid"s to refer to the correct column and row in the table. However, that doesn’t seem to have fixed it.

So is there a way that I can force the robot to locate the right cell based off of the specific criteria i’ve identified and forego looking at visual elements(that might look the same as other visual elements)?

I’m trying to build a robot that will update numbers in a table built into a 3rd party application. In other words, I want the robot to go to the October 2022 Column, find the row associated with “Provision for Depreciation” and use the “Type into” activity

From the statement provided above we could understand that you would want to fill the row which has an Anchor as “Provision for Depreciation”. This could also be the same configuration that we can follow when using the Type Into Activity.

When Indicating the element/field where you want to Type into use UiExplorer to get more information on the attributes available. After the Indication of the field is performed, use Indicate Anchor Activity and indicate the Provision for Depreciation label/field, so that the Robot could understand the typing is to be done relative to that element.

We may need more info on the elements on the screen to give a better suggestion. Or do provide the Screenshot of the UiExplorer after the Indication is performed.

hi @supermanPunch, thanks so much for your response.

I thought I’d be able to get around this by updating the various "<ctrl automationid"s to refer to the correct column and row in the table. However, that doesn’t seem to have fixed it.

As you have mentioned that you did perform some updations to the Selector, Could you maybe point specifically as to what were the changes tried ? 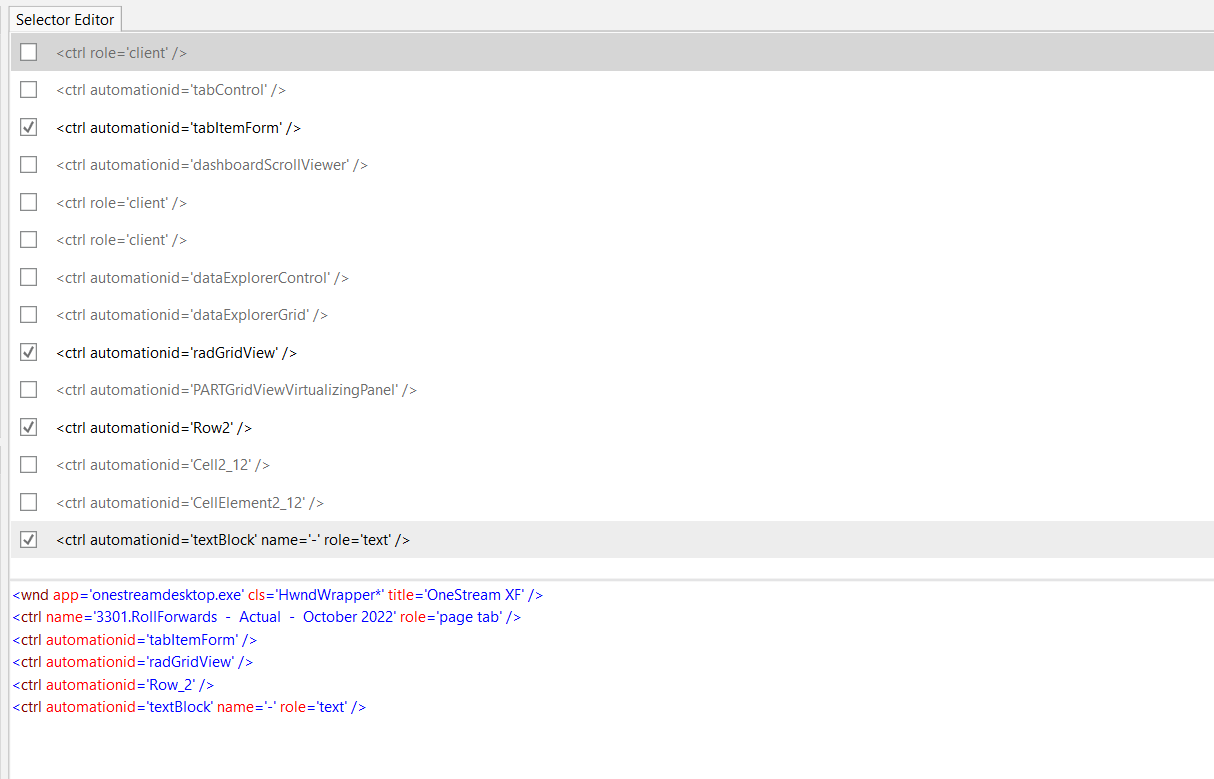 We see from the Selector that the Automationid attribute (Last but one line) has Row_2, Maybe using a counter for indicating the number for this attribute could be one check that we can perform, Or let us know if it is already tried.

Another approach would be to use Anchor Base Activity (Would need to Enable Show Classic in Filter if Modern enabled), but I do not think we would need this now but you could give a try with this as well.

Do provide us a feedback, Also Let us know if you could share with us the Screenshots of the App Screen, so that we can have a better understanding of the situation.

Thank you for all of those suggestions!

I think i’ll take a step back and disregard any updates to the AutomationID tags…because i think the issue i’m having is with simply identifying the element on the screen, when the text doesn’t match up.

to answer some of your specific questions: “3301.RollForwards - Actual - October 2022” is the name of the column.

I haven’t identified an anchor yet because i’m worried that by setting an anchor the UI Element will need to be a fixed distance from the anchor(which will change each month as a new column gets added for the new month. Is there a way to set an anchor to have a flexible distance from the element?(ie the anchor could help show the robot which row to look at?)

I’ve attached the first image where I unselected the “name” and “text” in the UI Explorer thinking that would help the robot skip over any visual element, but that didn’t seem to help.

The second image is the general layout of the application i’m trying to update. 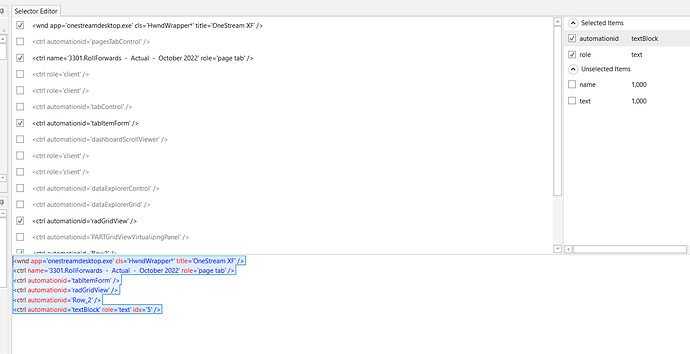